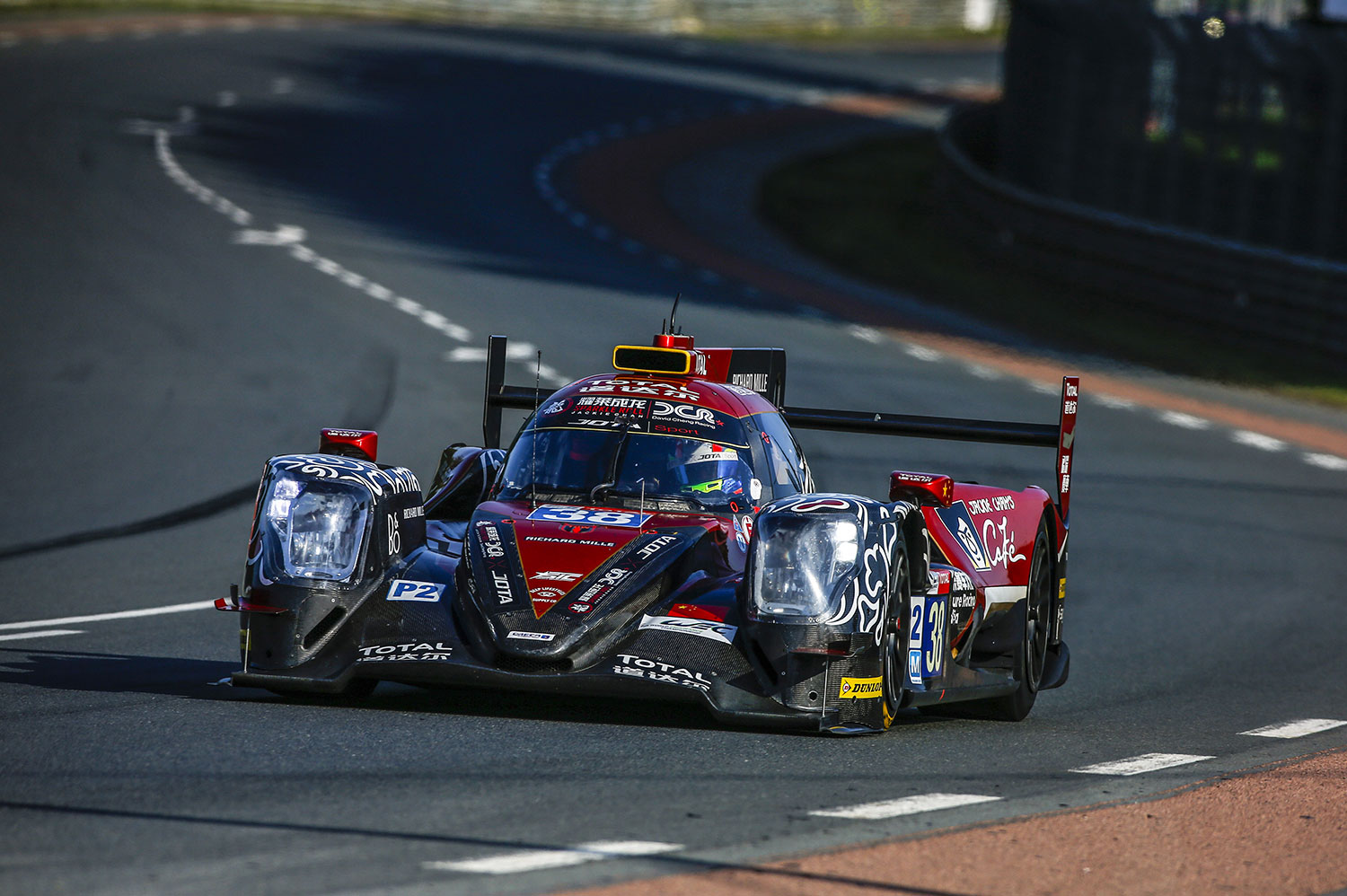 Posted at 10:30h in Divers by jules 0 Comments
Share

Gabriel Aubry, aged 20, took part in his first 24 Hours of Le Mans race last weekend at the wheel of the #38 JACKIE CHAN DC RACING x JOTA ORECA 07 – GIBSON. He shared his adventure with his teammates Ho Pin Tung and Stephane Richelmi. Having started in 9th on the starting grid, the crew of the #38 was penalised by a puncture during the first stint, and saw all their chances at a podium crushed following the explosion of the front left tyre after only three hours of racing. Over the 21 hours remaining, a solid performance by the team and their drivers made for a fantastic climb from 57th up to 8th place. The trio of Aubry – Tung – Richelmi left la Sarthe in 2nd place in the overall FIA WEC classification.

THE PRACTICE SESSIONS AS SEEN BY GABRIEL AUBRY :

FREE PRACTICE (Wednesday 16HR/20HR): Very complicated overall …
“The traffic on track wasn’t easy to manage because the car was a lot harder to drive than during the pre-tests, with quite a lot of vibration in the straights. The team managed to quickly identify the problem and you could notice the improvement to the performance by the end of the session.”

QUALIFYING 1 (Wednesday 22HR/0HR): My 1st night session !
“Running at night came as a great surprise for me ! I lost my markers and the speed seemed to be exaggerated. It was hard to get into the rhythm as I was looking for new markers at night. We were running 9th in LMP2.”

QUALIFYING 2 & 3 (Thursday 19HR/21HR – 22HR/0HR): Finding my confidence
“During the 2nd and 3rd qualifying, I didn’t get many laps to run due to slow zones and red flags: only 6 laps in total in the two sessions. My goal was to get as much experience at night as possible to work on my markers from the day before. My performance at night was good and my confidence was returning, which was my main objective! We classified 11th in Q2 and 5th in Q3.”

THE FILM OF THE RACE :

GABRIEL AUBRY – DRIVER: “In warm up, I was lucky to get a lap with very little traffic, which allowed me to set the 5th best time overall. That really boosted my confidence for what was to come, even though we were starting from 9th on the grid. I knew that our speed would be enough and that if we didn’t make any errors, the podium or even the victory in LMP2 was within our reach…”

GABRIEL AUBRY – DRIVER:  “We had a trouble free start, Ho Pin did excellent work during his first stint… I was ready to take the wheel, with my helmet on in the pit lane when I heard about our car’s puncture on the big screen… I took the wheel, ready to fight, putting out a textbook performance during my three stints, regularly overtaking 6 to 7 cars. The performance was great ! I was really enjoying myself… But two laps before the driver change, I started to feel some light vibrations in the front straight before the first chicane. By the time I warned the team over the radio, the tyre literally exploded and ripped away the left side… the return back to the pits, at 40 km/h, seemed interminable, with a part of the tyre still attached to the rim! I couldn’t drive any faster and the temperature of the engine was rocketing. I was worried I wouldn’t be able to bring the car back. I held strong, but once the mission was accomplished, I realised what had just happened! The important thing had been to bring the car back to the pit box and to do exactly what my team told me to. From that moment on, I started to feel the emotions as I realised that all the work the team had put into over months of preparation had been destroyed. Afterwards, you can re-join and know that you won’t be winning the race, or make it to the podium, but that you need to give your all for the remaining 21 hours of the race and you tell yourself that a lot can still happen. We just had to follow the team’s instructions to the letter and not make any mistakes. At the end, our #38 ORECA 07-GIBSON passed the chequered flag in 8th place in LM P2. What a feeling!”

GABRIEL AUBRY – DRIVER:  “This first 24H race will forever stay etched in my mind! It was an incredible human and technical adventure; everyone is fighting for the same cause for more than 16 days here in Le Mans. It’s cruel and fantastic at the same time! Now I need to concentrate 100% on the GP3 SERIES and the triple header that is on its way. I am expecting a lot after Barcelona. I am determined to get a podium, or why not even a victory in GP3 this month!”